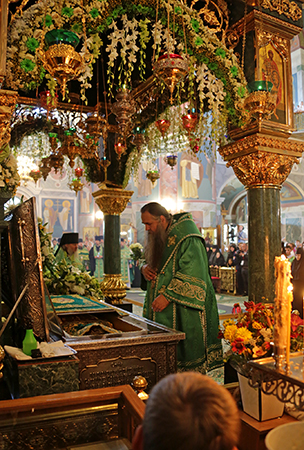 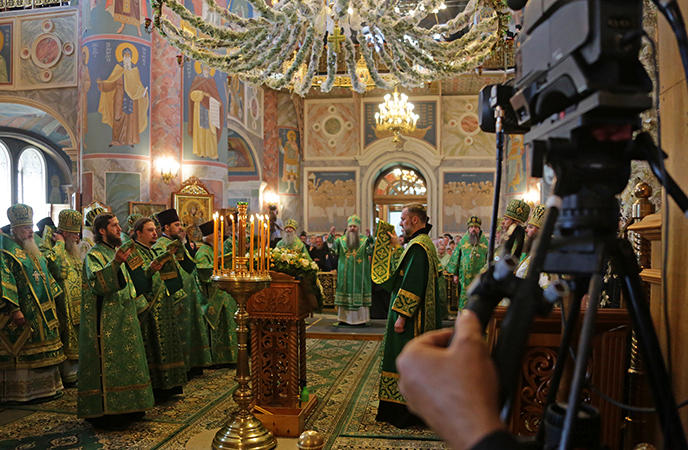 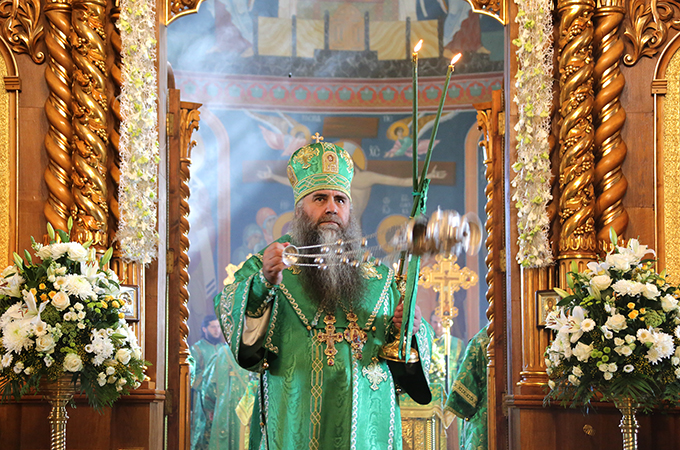 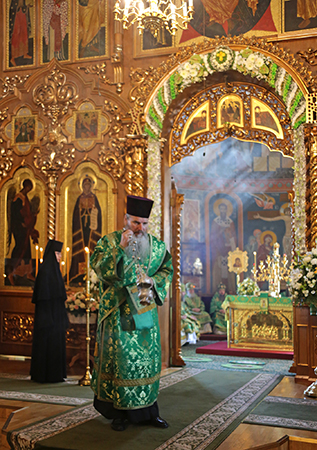 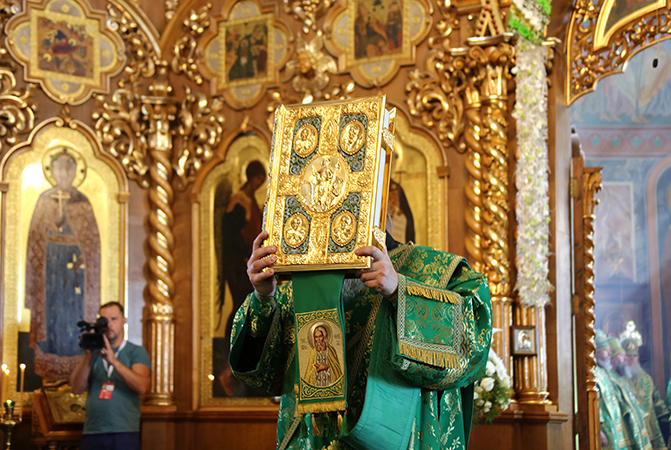 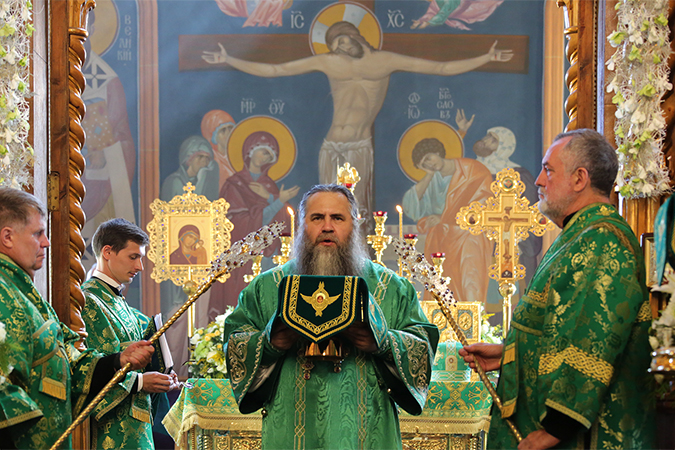 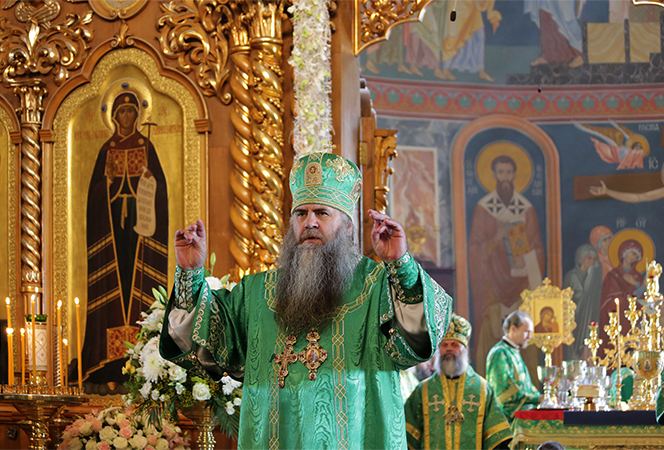 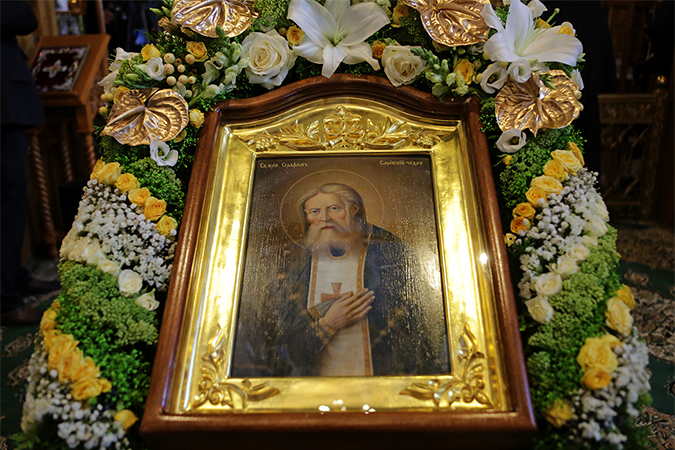 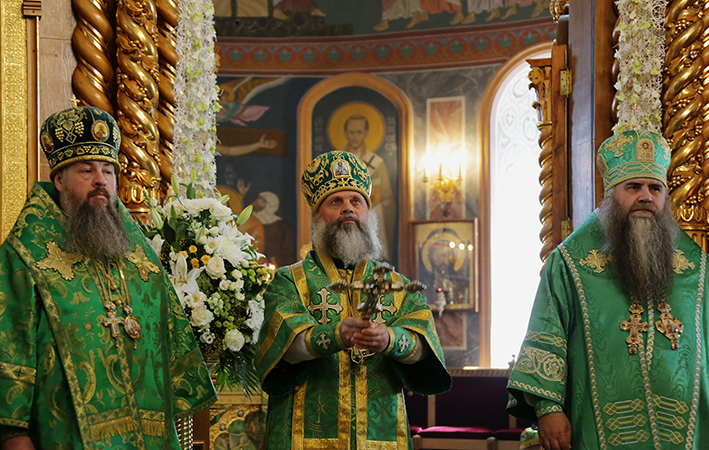 On August 1, 2022, the Seraphim-Diveyevo monastery held festivities in honor of the 119th anniversary of the glorification of Venerable Seraphim of Sarov among the saints.

The glorification of the wonderworker of Sarov took place on his birthday on July 19/August 1, 1903, following seventy years after his righteous death, in the presence of the members of the Imperial family. Numerous wondrous signs of grace-filled help, through the prayers to the elder in blessed repose during those days have shown to all Orthodox faithful that the Lord had bestowed upon the people a worthy intercessor and a speedy helper. We can say that the protection cover of the grace of Sarov has now spread all over Orthodox Russia.

“He is like the most powerful candle,” said Archbishop Antony (Smirnitsky) of Voronezh and Zadonsky about the wonderworker of Sarov, “that always burns before the Lord, equally in his life here on earth and in his present bold stand before the Holy Trinity.”

In the 1920s, the relics of Venerable Seraphim were removed and transported to Moscow to an anti-religion museum, with their traces later lost. At the end of the 1990s, this great relic was uncovered at the Museum of the History of Religion in Leningrad. A religious procession took the relics to Diveyevo and on August 1, 1991, they were placed in the Holy Trinity Cathedral of the Seraphim-Diveyevo monastery.

Numerous pilgrims flock daily to the monastery from faraway places to honor the memory of the God-bearing elder. For every believing soul, Father Seraphim is always felt as someone very special. All those who flock to him or prayerfully turn to him are graciously welcomed, comforted, and instructed by him as he helps and prays for everyone.

There were five Divine Liturgy services at the Seraphim- Diveyevo monastery on the remembrance day of Venerable Seraphim of Sarov: three services held at night and the early and late liturgy services in the morning.

In his post-Communion sermon, Bishop Filaret of Dalnekonstantinov congratulated all faithful who prayed at the feast of the first finding of the relics of Venerable Seraphim of Sarov and the day of his glorification among the saints. The Most Reverend Vladyka invited all the faithful to glean back to the history of Venerable Seraphim’s life and ponder at the events of the canonization after his righteous death.

“So, today we prayerfully appeal to Venerable Seraphim on behalf of the Christendom, our homeland and neighbors. The great God-pleasing saint acquired a particular spirit of righteousness. The acquisition of the Holy Spirit has become a theology of his life. It is no coincidence that at a Divine Liturgy on the days of the commemoration of the holy venerable fathers, we hear the Gospel message about the Beatitudes spoken by the Lord in His Sermon on the Mount. It is exactly these commandments that allow us to acquire the grace of the Holy Spirit. May each one of us today, through the prayers of Venerable Seraphim, experience this grace in life today,” concluded Metropolitan Filaret.

At the conclusion of the Divine Liturgy, Hegumenia Sergia of the Seraphim-Diveyevo monastery, on behalf of the entire monastic family, heartily thanked Metropolitan Georgiy of Nizhny Novgorod and Arzamas and the entire host of the archpastors for celebrating the hierarchical service that adorned the commemoration day of Venerable Seraphim.

Matushka hegumenia expressed her particular gratitude to His Eminence Metropolitan Georgiy for his care and concern for the Diveyevo monastery wishing that the Lord, through the prayers of His Most Holy Mother, Venerable Seraphim and all the saints of Diveyevo strengthens His Eminence as he carries out his archpastoral work and presented him a prosphora and the prayer beads for prayerful remembrance.

“Christ is Risen!” – the Metropolitan of Nizhny Novgorod and Arzamas has thrice addressed all the faithful present in the Trinity Cathedral with Venerable Seraphim’s favorite greeting.

Vladyka Georgiy recalled the words by Venerable Seraphim that he will lay in Diveyevo with his relics. When the relics of the saint were uncovered at the Sarov Monastery in 1903, they were placed in the Dormition Cathedral. Many people kept wondering at the time: how could the Sarov brethren give this great relic away to Diveyevo? But everything that has to do with Venerable Seraphim, the Most Reverend Vladyka has noted, is the work of Divine Providence. No one could have imagined that the time of troubles would come in Russia and the shrines will be destroyed. It seemed that the relics of Venerable Seraphim were lost forever. But at the end of the 20th century, a spiritual spring came to the Russian lands, the churches and the holy monasteries were restored and the relics of the elder were thus found in a miraculous manner.

“You and I are the contemporaries of this event and the collaborators in the works of the religious revival. The words from the Gospel that not a hair of your head will be lost (see Luke 21:18) have come true in the Diveyevo monastery, if only we could take these holy words close to our hearts and say, “Thank God for everything, both for sorrow and joy,” – said Metropolitan Georgiy. He added that Venerable Seraphim is the luminary, comforter and intercessor of all Russia, and we particularly need help of the Heavenly Church today, so that the Russian land is rejuvenated with the faith of Christ, piety, and diligence.

In conclusion of his hierarchical address, the head of the Nizhny Novgorod Diocese said that, because of the work-related commitment that required the presence of the Primate of the Russian Church in Moscow, the visit by His Holiness Patriarch Kirill to Diveyevo and the consecration of the Annunciation Cathedral in the Seraphim-Diveyevo monastery are postponed until later time. His Holiness asked me to convey to his flock in Nizhny Novgorod that he is looking forward to meet them soon and asks prayers from the Sarov and Diveyevo saints for this meeting to take place as soon as possible.

As a gift from the Diocese of Nizhny Novgorod, Metropolitan Georgiy presented His Holiness the Tenderness” Icon of the Most Holy Mother of God, so that She could intercede for all the concerns and cares of His Holiness, and we could pray together with our Primate in the land of Nizhny Novgorod.