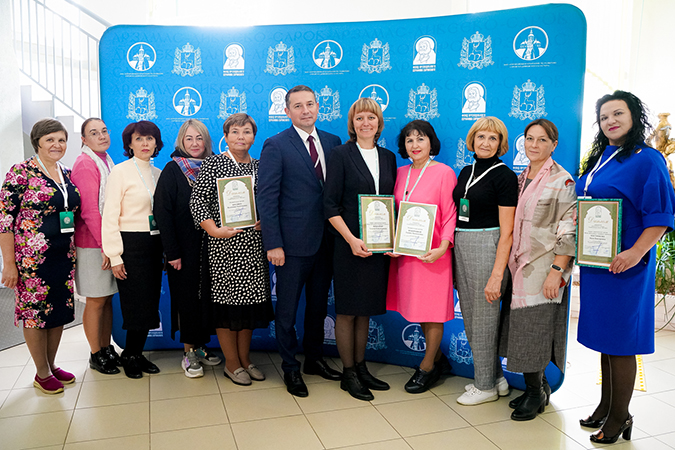 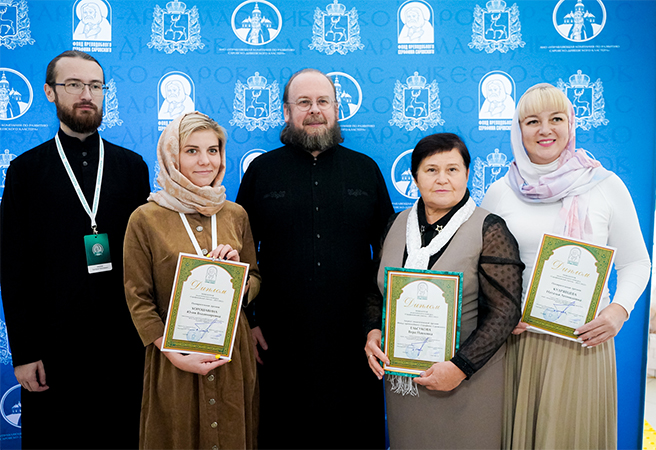 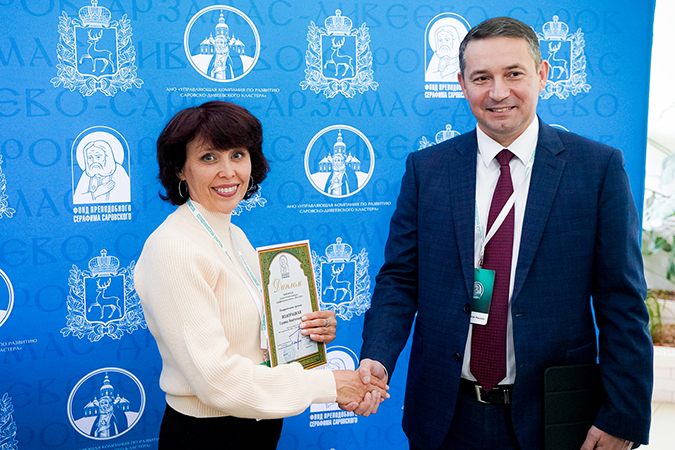 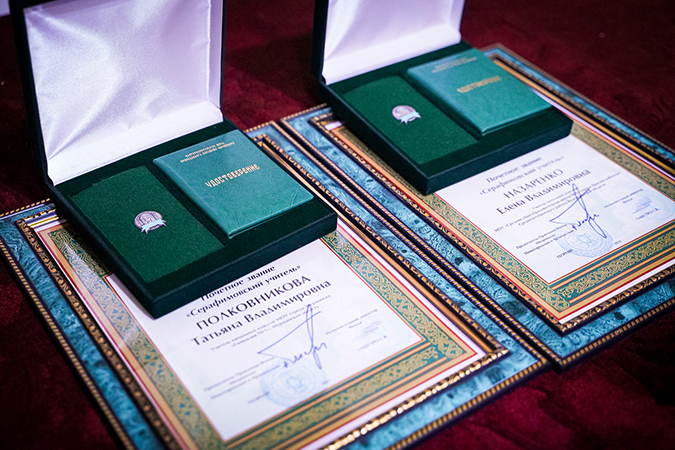 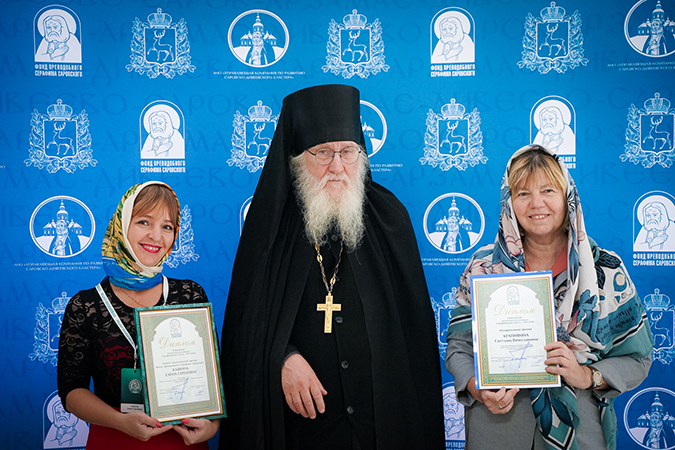 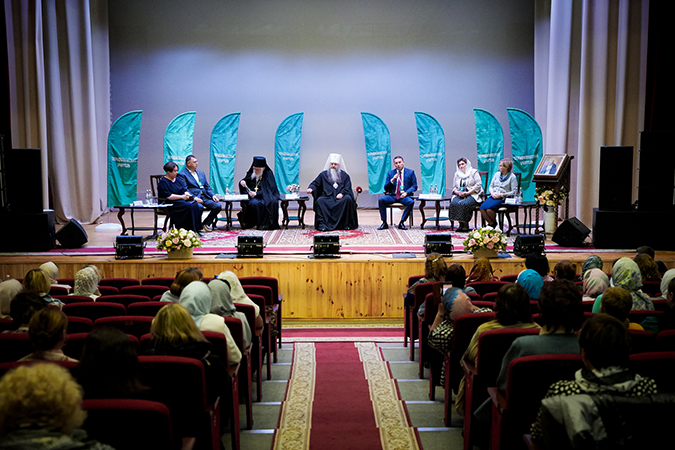 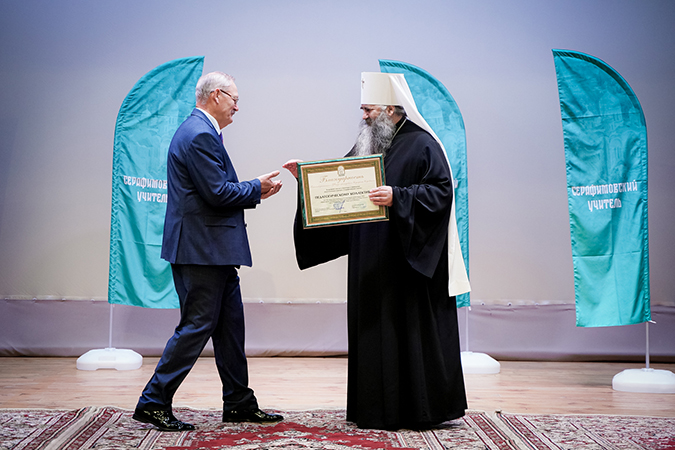 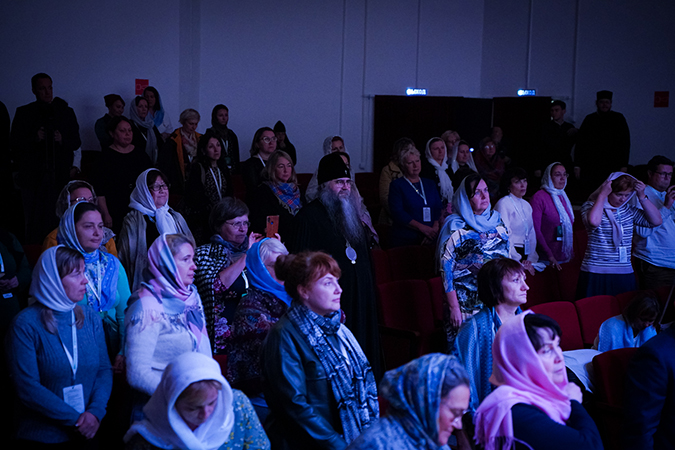 On September 15, the Center for Slavic Culture in the village of Diveyevo hosted the plenary session of the conference “The Legacy of St. Seraphim of Sarov and current issues of spiritual and moral education” and final celebration for the winners and laureates of the “Seraphim’s Teacher” contest in 2021/2022. Metropolitan Georgiy of Nizhny Novgorod and Arzamas presided at the gala event.

Svetlana Kotriakhova, Director of the Center for Advanced Training and Resourcing of the Municipal Educational System in Kirov, talked about the connection that may be found between modern physics, astronomy and the Orthodox faith and how to deliver the Biblical foundations of natural sciences to the students.

Nataliya Suzdaltseva, director of Sarov Orthodox school talked about biblical foundations of the Russian literature, how to reveal it and make it known to students.

Andrei Elisov, teacher of history, social studies and foundations of Orthodox culture at the Savasleya school in Kulebaki district, Nizhny Novgorod Region, shared his experiences regarding teaching children how to perceive biblical timelessness through the lens of historical events.

Archimandrite Platon (Igumnov) drew everyone’s attention to the education and upbringing of youth as being two sides of the same process. In his speech, the professor of the Moscow Theological Academy spoke about values and virtues necessary to be instilled in the young generation.

Hegumen Cyprian (Yashchenko) spoke about his work on the educational program “The Ladder of Virtues” and how to make Gospel message practically relevant to the young people of today and offered to cooperate with the resource centers of spiritual and moral education in Nizhny Novgorod.

This year, the honorary title of the “Seraphim’s Teacher” was awarded to four nominees: Alexei Andronov, Sunday school teacher of the Resurrection Cathedral in Arzamas and senior researcher in the Museum of Russian Patriarchy in Arzamas of the Nizhny Novgorod State Historical and Architectural Museum-Reserve, Lyudmila Kulikova, a teacher of history, social studies and foundations of Orthodox faith in the Sarov Orthodox school, Elena Nazarenko, elementary school teacher at the school # 4 in Krasnoslobodsk of Sredneakhtubinsk district of Volgograd Region and Tatiana Polkovnikova, primary school teacher in the village #1 in Murmansk.

Thirty contestants were recipients of the teaching award, fifteen more had a special award, and eighty-six received an incentive award. Nine contest participants were presented Commendation letter from the Fund of Venerable Seraphim of Sarov.

A documentary film about the winners of the “Seraphim’s Teacher” contest by the Nizhny Novgorod “Obraz” TV company was presented to the conference participants.

“I am always happy to take part in the work of this forum,” Metropolitan Georgiy addressed the audience. “Our partners and all of us hope that, together with you, we can transform our country by preaching the word of God and offering the spiritual and moral education. It is vital for us to outline for the secular school of today the idea that a believer is not the worst citizen of the country. As for the war, I heard from my father and other war veterans that there were no atheists during the war. We need to consolidate our society around love for the Motherland and traditions. The religious perception of life is what makes a person stronger. And vice versa, if the enemy aims to destroy the country, it needs to deprive people of its traditional values. Therefore, as we are aware of our weakness, we call for help from Venerable Seraphim of Sarov, the Protection Cover of the Queen of Heaven, the Lord, and Venerable Sergius of Radonezh to receive God’s blessing upon our labors that they will bear great and good fruit. May God help us all!”