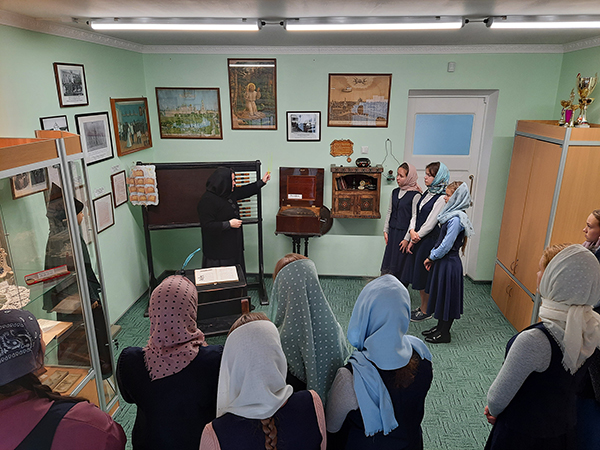 The Alexandrinskaya Orthodox school started a new year by winning the competition organized up by the Presidential Grants Fund. It was already the fourth time the school received the President`s grant to support its projects. This time around, the teachers and students will engage in local history research studying the history of the Seraphim-Diveyevo monastery and their home area of the Nizhny Novgorod Region and Diveyevo.

The school will have one and a half years to implement the planned activities. Nun Natalia (Lyalushko), the head of the “Link of Times” project and the school’s principal, says that the school has already begun work on the assignment areas.

The land of Diveyevo has nurtured five Heroes of the Soviet Union, the participants of the Great Patriotic War. They are Ivan Yezhkov, Mikhail Kozomazov, Mikhail Piskunov, Valentin Sitnov, and Nikolay Shalashkov. The streets in Diveyevo proper were named after them. Schoolchildren will do the research work and study documents and archival materials of their life and heroic deeds. Based on the gathered information, the students will create memorial plaques. They will be placed at the beginning of every street bearing the hero’s name.

A few years ago, the school compiled information about the lives of women from Diveyevo who participated in the Great Patriotic War as the home front workers. Some of the women were still alive at the time and it was possible to meet them. These heroic women have already passed away, but the school museum will keep photographs, personal belongings and interviews in grateful memory of them. The museum exhibit is named “The Unwomanly Face of the War.” The extension of this project will be a publication of a book based on materials collected.

The children of Diveyevo will be tasked with the creation of an album “Diveyevo Throughout the Year,” where they will speak about the memorable events taking place in the monastery from January to December. Children’s drawings, photos, poems and stories will be published in this edition.

“Why is the Holy Kanavka decorated with flowers?”, “Why is there the Royal larch tree located next to the Kanavka?”, “Why are Batiushka Seraphim’s dry crusts, but not, say, the candy handed out in Diveyevo?” Questions such as these are asked not just by children, but also the adults. Students will answer them in short video clips about 5-7 minutes long. Moreover, children will try out to be scriptwriters and producers.

Other projects have been planned as part of the grant with the aim to instill the sense of patriotism in children and make their homeland their own in truth.