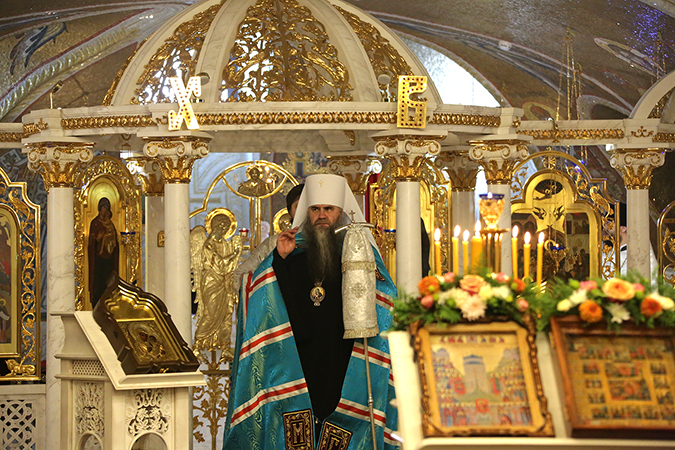 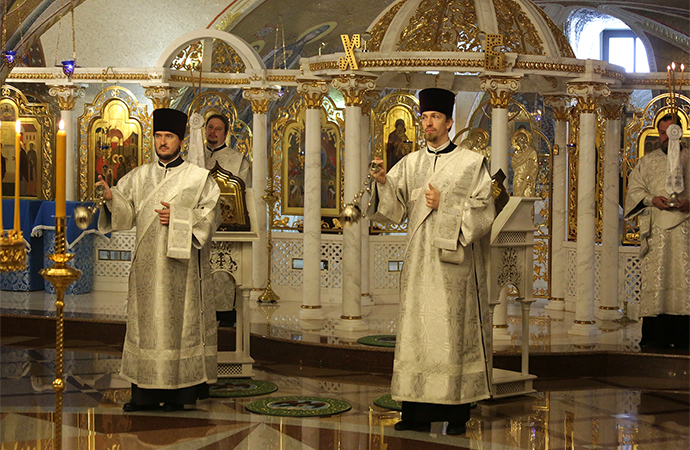 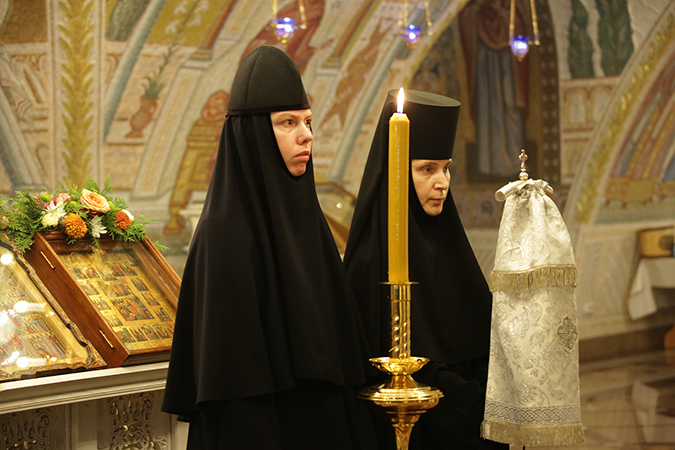 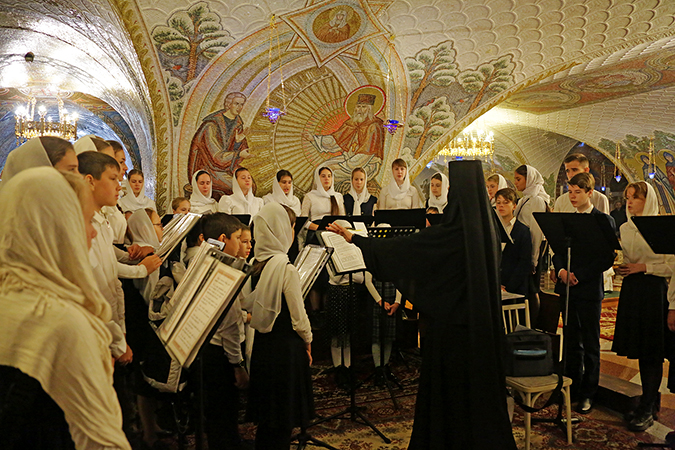 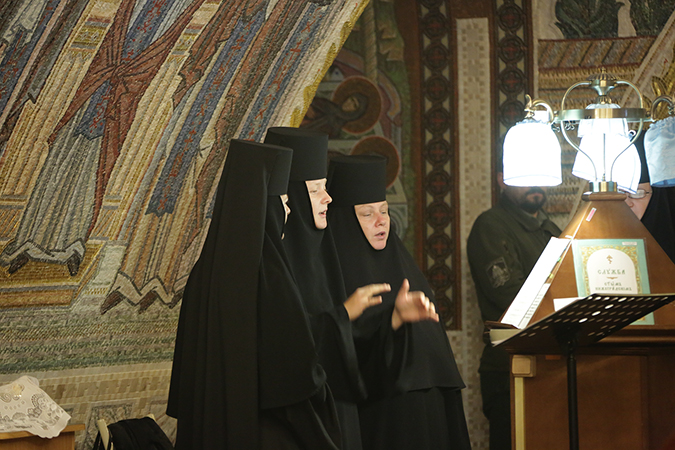 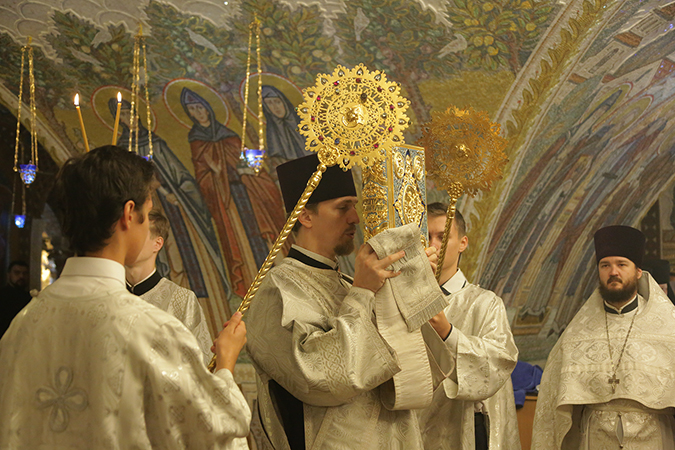 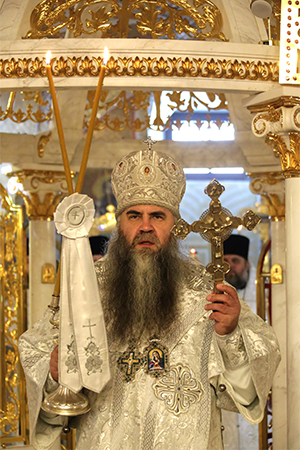 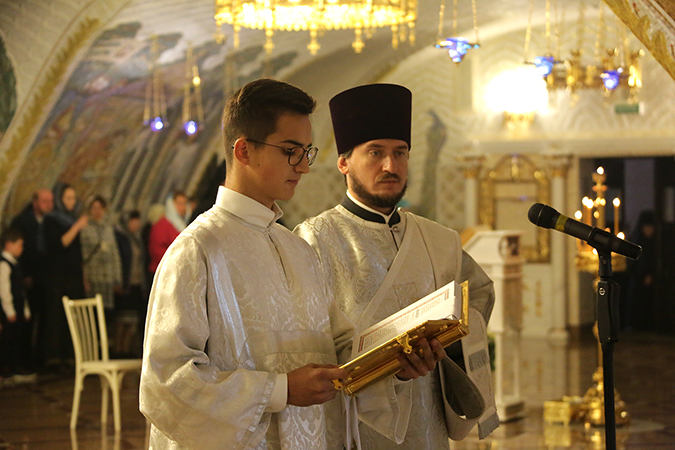 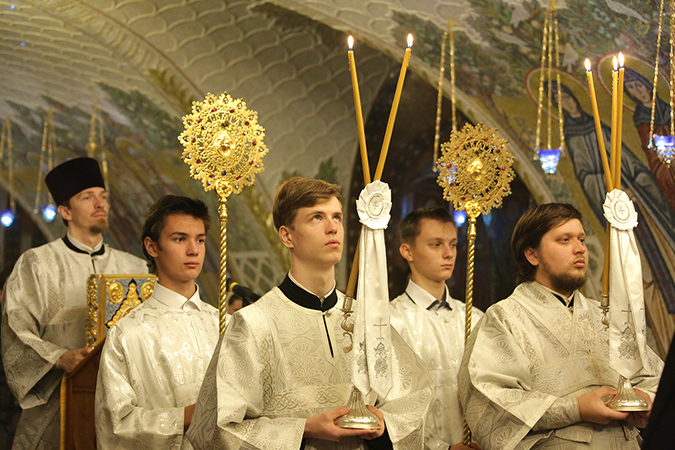 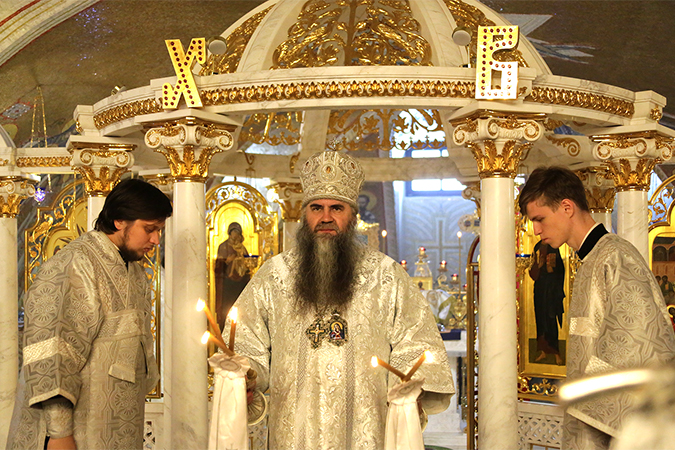 On today’s feast day of the Synaxis of the Saints of Nizhny Novgorod, two hierarchical services were celebrated in the Seraphim-Diveyevo monastery. Metropolitan Georgiy of Nizhny Novgorod and Arzamas presided at the service in the Dormition Church, with Bishop Innocent of Sormovo, the vicar of the Nizhny Novgorod Diocese, celebrating at the Trinity Cathedral.

The antiphonal singing of the two choirs adorned the service in the Dormition Church, including the sisters’ monastery choir and the children’s choir from the Alexandrinskaya monastery Orthodox school.

Rev. Fr. Alexiy Kurnosov, the school’s father confessor and clergyman of the Seraphim-Diveyevsky Monastery, in his post-Communion sermon used the exploits by the Holy Prophet Zechariah and the Righteous Elizabeth, the parents of St. John the Baptist, as well as the Righteous Saints Prince Peter and Princess Fevronia, whose memory the Holy Church commemorates today, as an example to show what it means to be a believer and to place all our trust in God.

“A believer is always held responsible for all things before God and he is ready to confess his faith. The life of the parents of the Baptist of the Lord is such an example. Because they were childless, their people rejected them, but they did not lose faith. So, the merciful Lord glorified their trust in Him and they beget a son in an old age, who is considered the greatest among those born of women. Therefore, the patience and humility in faith can produce great fruit.

The lives of the Holy Prince Peter and Holy Princess Fevronia were also filled with the deeds of the confession of faith. Because of their faith, they displayed the depth of their love for one another and their people.

These two holy families sought out to have their deeds, thoughts, and desires based on God’s ways, and their search was justified. I hope that all of us will imitate them in faith, just as the Apostle Paul has commanded: “Remember those who rule over you, who have spoken the word of God to you, whose faith follow, considering the outcome of their conduct” (Hebrews 13:7),” said Father Alexiy.

At the conclusion of the Divine Liturgy, Hegumenia Sergia, the abbess of the Seraphim-Diveyevo monastery, on behalf of the entire monastic family, thanked Metropolitan Georgiy for his archpastoral prayers during the Divine Liturgy and wished that God, through the prayers of the Most Holy Mother of God, all the saints of Diveyevo and Nizhny Novgorod strengthens His Eminence as he carries out his archpastoral labors and presented the prosphora to him.

The head of the Nizhny Novgorod Metropolia congratulated all those praying at church on Sunday and, in his sermon, paid special attention to the words from today’s Gospel passage: “For many are called, but few are chosen” (Matthew 22:14).

Metropolitan Georgiy noted that the Lord calls each person to eternal life, to fulfill His law. The fulfillment of this law means to have love for God and neighbor. This is precisely the kind of love that is longsuffering, kind, does not envy, nor parade itself, it is not puffed up, does not behave rudely, does not seek its own, is not provoked, thinks no evil, does not rejoice in iniquity, but rejoices in the truth (see Cor. 13:4-6).

“Being chosen by God means man hears the voice of God in his heart and walks in the way of His commandments, that’s why the Lord tells us, ‘Come to Me, all you who labor and are heavy laden, and I will give you rest. Take My yoke upon you and learn from Me, for I am gentle and lowly in heart, and you will find rest for your souls; for My yoke is easy, and My burden is light (Matthew 11:28-30),'” said the Eminent archpastor.