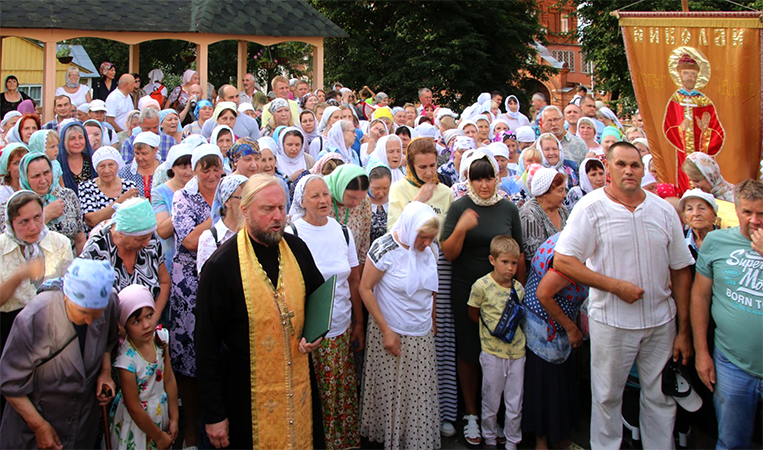 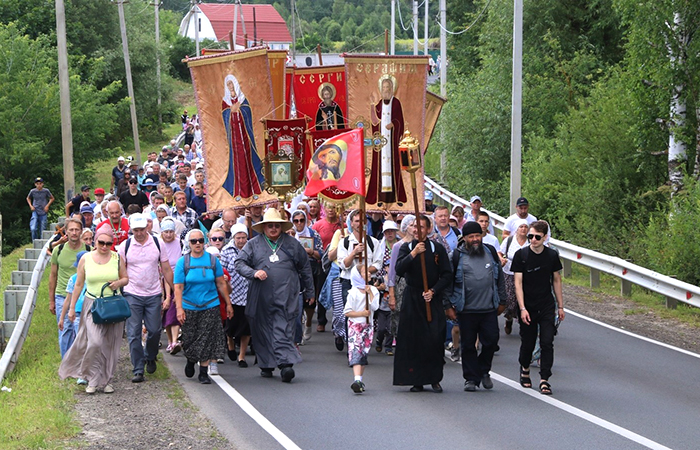 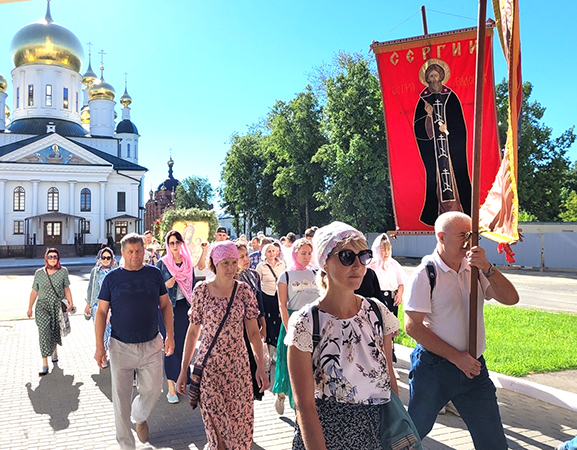 On July 31, following a two-year break, the traditional 25th procession walked from Sarov to Diveyevo in honor of the remembrance day of Venerable Seraphim of Sarov.

The pilgrims carried icons of Venerable Seraphim of Sarov, “Quick to Hear” Icon of the Mother of God and banners. With the singing of the akathist to Batiushka Seraphim, they walked from the All Saints Church across from the Holy Dormition Sarov Pustyn monastery towards the Near and Far hermitages of Venerable Seraphim, where they held a prayer service. Then, the faithful headed to Diveyevo stopping inside the city limits and praying at the Church to the Holy Royal Passion Bearers.

This year, the procession fell on a Sunday, thus it was particularly crowded, thanks to the Orthodox from all corners of the country who joined the procession along the entire route. About two hundred people left Sarov, then another one hundred and fifty waited behind the security checkpoint. Next, near the village of Khvoschevo, the number of participants in the procession grew to five hundred, whereas the total of a thousand of pilgrims has reached Diveyevo. Among them were residents of the surrounding villages and settlements, as well as those who arrived to the Seraphim festivities, including the large groups from Belgorod and Orenburg, the Moscovites and residents from the central regions of Russia.

The procession was accompanied by highway patrol cars and ambulances. The pilgrims stopped to rest and refresh themselves in the villages of Tsyganovka, Khvoschevo, Yakovlevka and Osinovka. Local residents traditionally set tables with refreshments. Water blessing services were held there, while during the walk, the faithful mostly recited the Jesus Prayer, alternating between the groups of men and women.

Along with the usual printed icons carried there, one could see true family relics. For example, there was a small, unremarkable-looking, half-faded metal icon of batiushka Seraphim given to a parishioner by her grandmother who died half a century before. She in turn received this icon from a pilgrim who passed through her village and the grandmother received healing after praying before this icon, when the headaches of many years were gone. The villagers believed that whoever welcomed a stranger in their homes would receive God’s blessing, but those who did not would be punished and their family line would be cut short. Another pilgrim carried an icon of the holy hiero-confessor Sergiy (Srebriansky), the father confessor of the Sts. Martha and Mary community of mercy and an associate of venerable martyr Grand Duchess Elizabeth Feodorovna who was related to him.

Next to the village of Yakovlevka, the participants were entertained with a concert presented by children who spend their summer break in the House of pilgrimage for children located in the village. They practiced for the performance and sang many songs, while the villagers collected donations for the restoration of the church to Venerable Seraphim of Sarov built in Yakovlevka on donations from the Holy Royal Passion Bearers.

Usually, the July 31 procession ends with a walk along the Holy Kanavka in the Seraphim-Diveyevo monastery, but this year the participants walked inside the monastery individually. Following the festive All-night Vigil in the Holy Trinity Cathedral, the residents of Sarov went back home by bus. The next day on August 1, they arrived to Diveyevo again, and after the festive All-night Vigil in the Seraphim-Diveyevo monastery, the procession dedicated to the remembrance day of Venerable Seraphim of Sarov returned to Sarov.

The procession from Sarov to Diveyevo and back walked for the first time in 1996. Back then, its core group of pilgrims was made up of elderly women from Sarov, the so-called “white headdresses,” who preserved the Orthodox faith during the years of persecution of the Church. Nowadays, the procession includes many children, young people, and men, who came from all parts of our country and represent various social groups of contemporary Russian society.