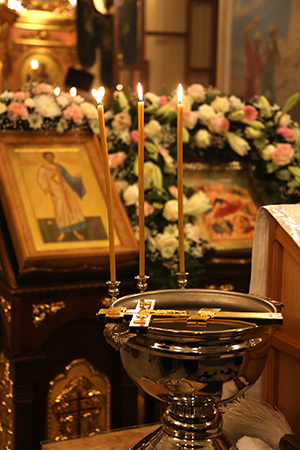 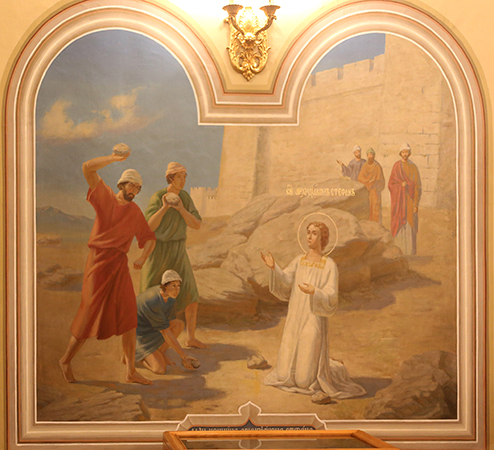 “You were the first on earth to shed your blood for Christ, O blessed one”.

On the day of martyrdom of Holy Protomartyr and Archdeacon Stephen, the Seraphim-Diveyevo Monastery celebrates the patronal feast at the right side chapel of Our Lady of Kazan Cathedral.

Saint Stephen was the first of seven deacons appointed by the apostles to care for the poor. Filled with grace and spiritual power, he performed many miracles and signs converting people to faith in Jesus Christ.

On this day, 1988 years ago, angry Jews led him out of the city and subjected him to stoning. He met death with joy, and his last words were: “Lord, lay not this sin to their charge” (Acts 7:60). The Lord granted him the privilege of being the first among Christians to suffer for the faith, thus he is called the Protomartyr.

Holy Protomartyr and Archdeacon Stephen is especially revered at the Diveyevo monastery.

According to tradition, Matushka Alexandra, the founder of Our Lady of Kazan church, prayed in hopes of finding out God’s will as to what saint should become a patron of one of the side altars. During prayer, she heard someone knocking at the window and a voice announced: “Dedicate this side chapel in my honor.” – “Who are you, Lord?” – matushka asked. – “Protomartyr Archdeacon Stephen is my name.”

After the Kazan Church was desecrated during the Soviet times, the altar to the Holy Apostle, Protomartyr and Archdeacon Stephen was consecrated for the second time on September 8, 2004 by Bishop (nowadays a Metropolitan) Georgiy of Nizhny Novgorod and Arzamas.

According to tradition of the Seraphim-Diveyevo monastery, an all-night Vigil, paraklesis with the water blessing prayer service and the Divine Liturgy were celebrated there.