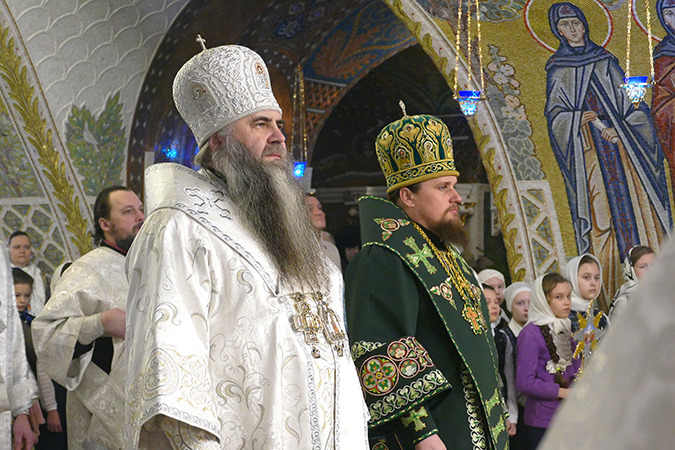 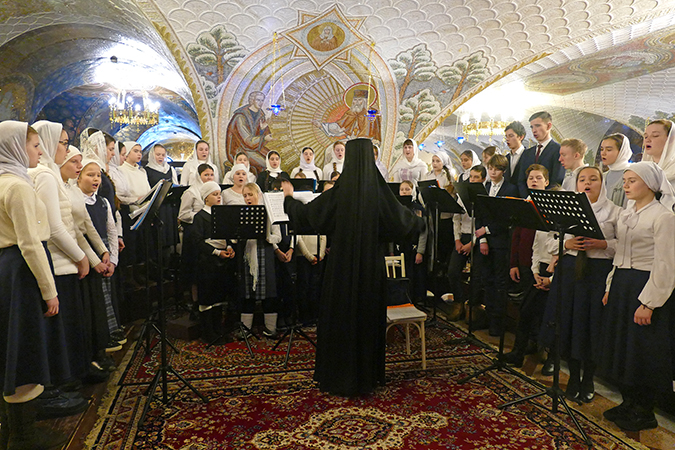 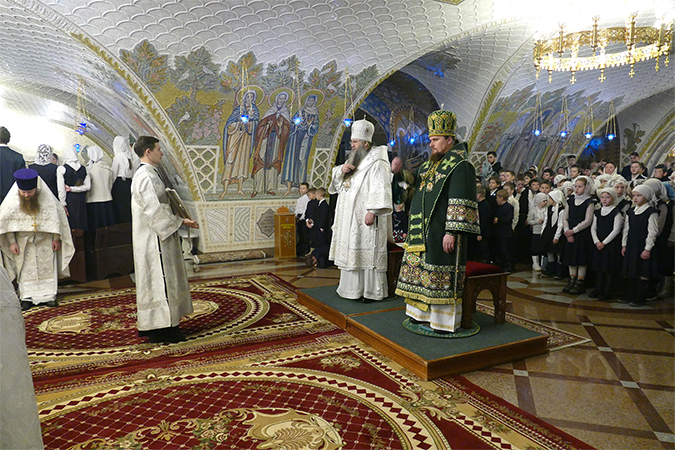 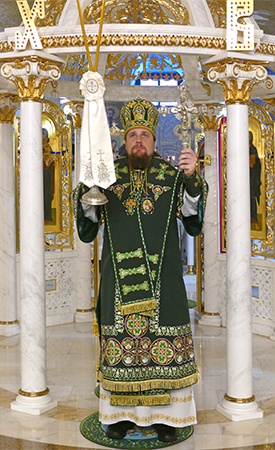 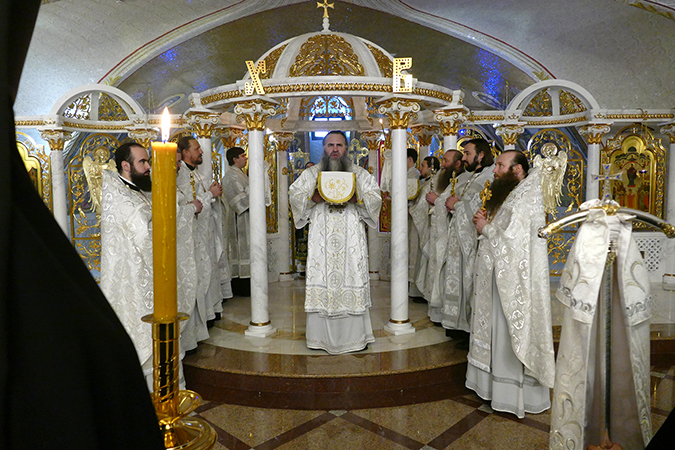 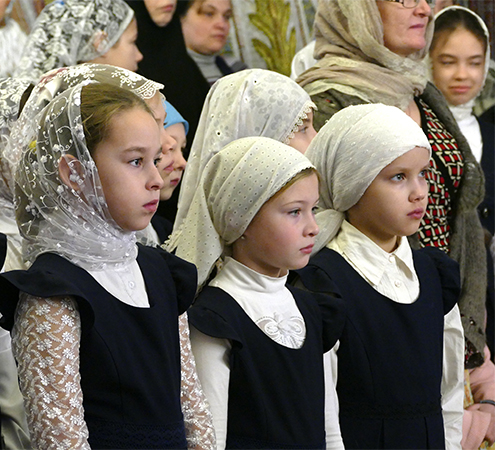 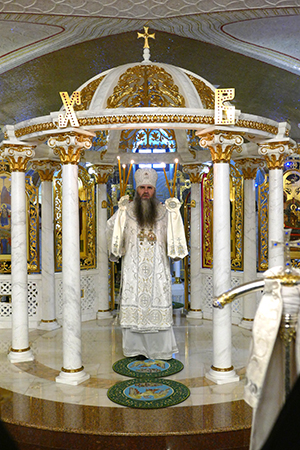 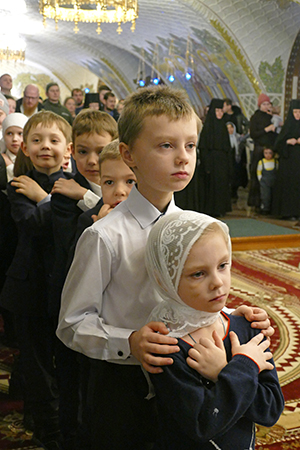 The Christ Child was circumcised today and elder Joseph called His name Jesus, because that is how He was called by “the angel before He was conceived in the womb” (Luke 2:21).

Circumcision for the Jewish people symbolized not only the covenant between God and man, but also the redemption of the sin of the forefathers. It foreshadowed the baptism in the Old Testament and the Lord accepted it to reveal Himself not as perpetrator but the restorer of the old Covenant.

But why did the Savior humble Himself so deeply? Because human pride was way too great. Disobedience is healed by obedience but pride is healed by humility.

The Seraphim-Diveyevo monastery celebrated the Feast of the Circumcision of the Lord and the remembrance day of Holy Hierarch Basil the Great, Archbishop of Caesarea in Cappadocia, with a hierarchical service. Metropolitan Georgiy of Nizhny Novgorod and Arzamas presided at the late-morning Divine Liturgy in the Dormition Church of the Annunciation Cathedral. Concelebrating His Eminence was Metropolitan Joseph of Romny and Burynsk. The alternate singing of two choirs, the sisters’ choir and the monastery school choir, adorned the service.

During the post-communion sermon, Very Rev. Fr. Michael Poroikov congratulated all the faithful with the Circumcision of the Lord and emphasized that every event in the Savior’s life serves as a precious and edifying example for us.

The preacher noted that many children taking first steps toward God are present at church today. Through obedience to God’s law and the Mother Church, these young parishioners will be able to inherit the Heavenly Kingdom the Lord spoke about so many times in the Holy Gospel. “Blessed is the one who learns to pray since childhood,” batiushka said. The Lord held special affection for children: “Let them come to Me, and do not hinder them from coming to Me, for of such is the kingdom of heaven” (Matthew 19:14).

Father Michael drew everyone’s attention to the fact that it was on this day that the Lord received His name and revealed it to us. On the day of His circumcision, people named the Son of God as Jesus for the first time, following the announcement by Archangel Gabriel in Nazareth. Yet, at the time, the Most Holy Virgin was the only one Who heard His name from the Archangel, while today it was Joseph who announced it, repeated by the Most Holy Virgin, and heard by the priests, whereas the wise men spread the news across the whole universe. We also received a great gift from God to say His great name. In his letter to the Romans, Apostle Paul writes, “For whoever calls upon the name of the Lord shall be saved” (Romans 10:13), so do we, during the time of either joy or trouble, cry out to Him, “Lord Jesus Christ, Son of God, have mercy on me, a sinner,” “Our sweetest Lord Jesus, save me.

The experience of the holy fathers such as St. Basil the Great whose deeds we commemorate today, or Venerable Seraphim of Sarov and many others, attests to the fact that the unceasing invocation of the name of the Lord is the shortest path to salvation.

At the conclusion of the Divine Liturgy, Hegumenia Sergia, the abbess of the Seraphim-Diveyevo monastery, on behalf of the entire monastic family, heartily thanked the archpastors for their prayers on the first day of the new year. Matushka Sergia wished that the Lord, through the prayers of the Queen of Heaven, Venerable Seraphim of Sarov, all the saints of Diveyevo and St. Basil the Great strengthens Metropolitans Georgiy and Joseph in carrying out their archpastoral duties and presented them with prosphora and icons of Venerable Seraphim of Sarov. It is noteworthy, said Hegumenia Sergia, that the New Year began with a service held in the Dormition Cathedral of the Annunciation Cathedral, and expressed hope that the beautification of the new cathedral will be completed soon.

Metropolitan Georgiy received a special Christmas gift from the students of the monastery Orthodox school: its students recited poems and sang songs dedicated to the birth of the Child Christ.

The head of the Nizhny Novgorod Metropolia thanked the students for their greeting and said that they are the fortunate ones as they have an opportunity to receive spiritual education at school.

Metropolitan Georgiy expressed gratitude to Hegumenia Sergia for her kind words, the prosphora and icons. In his hierarchical address, the ruling archpastor reminded about the life of Holy Hierarch Basil the Great and mentioned his most important works and spiritual deeds for the good of the Church of Christ.

The hierarch of the church lived in the fourth century between the First and Second Ecumenical Councils. At that time, the Arians confused the people with a heresy stating that Christ was not true God but a man bestowed with a special ability. Their hearts could not comprehend how the Lord was God and man at the same time. Metropolitan Georgiy pointed out that St. Basil was practically the only one among bishops who preserved the right faith in the fourth century. He held correspondence with many bishops from other countries that yielded good fruit only after his righteous death: when the fathers of the Church from all corners of the world communed to meet at the Second Ecumenical Council, they were amazed that their personal views of the confession of faith were in complete accord with one another and with the Holy Hierarch Basil’s teaching. Such was the work of the God-pleasing saint who preserved the purity of Christian faith.

In conclusion, Metropolitan Georgiy warmly welcomed Metropolitan Joseph who arrived from our sister country of Ukraine to celebrate the remembrance day of Venerable Seraphim of Sarov.

Metropolitan Joseph shared the joy that filled his heart during the holy days of Christmastide and wished that the birth of Christ Child would always remain alive in our hearts. The head of the Romny Metropolia thanked the Lord for the opportunity to pray together with Metropolitan Georgiy during today’s feast and noted that their joint service at the altar of the Lord has once again proved that there is no border between Russia and Ukraine. Vladyka Joseph wished that Metropolitan Georgiy continue to pray and work unceasingly to the Lord setting a good example of being in service to God for all of us.