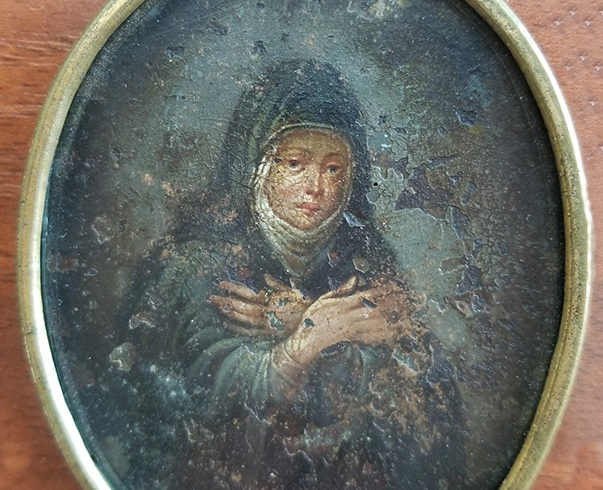 A new exhibit item, a pendant with the portrait of Venerable Elena Vasilyevna (Manturova) painted in the pre-revolutionary Diveyevo’s workshops was added to the collection of the House Museum of Blessed Pasha of Sarov. It depicts Venerable Elena who is about to receive the communion. She was laid to rest in her coffin holding her hands in the same manner. The “Chronicle of the Seraphim-Diveyevo monastery” reads: “With her braids covered by a headscarf, she wore a hat underneath it made from batiushka’s (Venerable Seraphim’s) vestment cuffs that he had placed on her by himself after tonsure.”

The pendant was made at the beginning of the 20th century and kept in possession by different generations of the same family. The last representative of this family, being advanced in age, decided to part with the family treasure.

Once, the pendant had a portrait of Venerable Seraphim of Sarov painted on its opposite side but it has been badly damaged.